The regional planning cycle begun in 2013 for the Barrie/Innisfil sub-region was completed in December 2016 and an Integrated Regional Resource Plan (IRRP) was released. 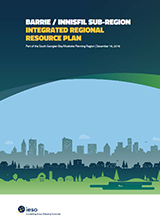 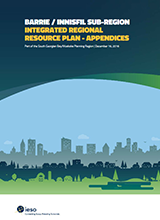 IESO Letter to Hydro One

The Barrie/Innisfil area is a summer-peaking sub-region that encompasses the City of Barrie, the Towns of Innisfil, New Tecumseth and Bradford West Gwillimbury, and the Townships of Essa, Springwater, Clearview, Mulmur, and Adjala-Tosorontio.

Over the last five years demand in the area has been stable, at approximately 400 MW. There is, however, substantial growth forecasted over the next 20 years due to urbanization, intensification of developed areas, and new commercial demand growth. Most of this growth is driven by residential development and is expected to occur primarily in southern Barrie and in the Town of Innisfil.

In the next 20 years, conservation and local generation is expected to offset approximately 25 per cent of growth in the area, resulting in a net average annual growth of 2.7 per cent.

Two planning studies have been conducted in the South Simcoe area in the last 12 years. The first was a joint utility planning studying initiated in 2003 between six LDCs in Simcoe County, a large industrial customer and Hydro One Transmission. This study resulted in the addition of Everett TS (in-service 2007) and the Southern Georgian Bay Transmission Reinforcement, which upgraded the Essa-to-Stayner line from 115 kV to 230 kV and installed a 230/115 kV auto-transformer at Stayner TS (in-service 2009).

In 2010, Hydro One Transmission initiated a regional supply planning study of the South Simcoe area. This study resulted in the installation of low voltage capacitors at Midhurst TS (in-service 2012).