An Integrated Regional Resource Plan (IRRP) was released for the Barrie/Innisfil sub-region in December 2016.

An Integrated Regional Resource Plan (IRRP) was released for the Parry Sound/Muskoka sub-region in December 2016.

In 2014, a Needs Screening was carried out by Hydro One Networks Inc. for the South Georgian Bay/Muskoka region. The report identified several needs that may require regional coordination and concluded that these needs should be reviewed further under the IESO-led Scoping Assessment process.

The participants in the Scoping Assessment process consisted of the IESO, Hydro One and the local distribution companies servicing the region. They further reviewed the identified needs to determine the best planning approach, and identified two sub-regions – Barrie/Innisfil and Parry Sound/Muskoka. 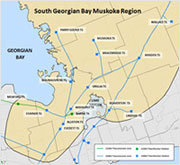 Working Groups were established to undertake Integrated Regional Resource Plans (IRRP) for each sub-region. Additional local electricity requirements identified in the Needs Assessment will be addressed by Hydro One and the impacted local distribution companies. Identified needs related to the bulk transmission system supplying this region will be addressed in parallel with the IRRP process by the IESO, with results communicated to the regional planning participants.

The South Georgian Bay/Muskoka region is located in central Ontario and includes more than 30 municipalities and 10 First Nation communities. See Scoping Assessment for a complete list.

The local distribution companies providing service to customers in the South Georgian Bay/Muskoka region include: