The single regional planning area for Northwest Ontario has been divided into four planning sub-regions.  Information on the remote community connection plan can also be found in this section.

An Integrated Regional Resource Plan was released for the West of Thunder Bay sub-region in July 2016.

There is potential for renewed growth in demand associated with forecasted mining activities and resource development in various communities across the West of Thunder Bay sub-region. Due to its connection with the North of Dryden sub-region, this region's electricity supply can be affected by the potential for development in the area north of Dryden. Regional planning will provide options to address the potential for demand growth, considering both the limits on the existing supply to the area, and opportunities for coordinating demand and supply options. 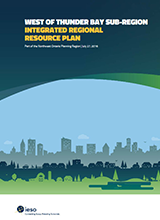 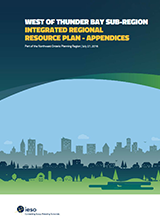 A Working Group consisting of the local distribution companies in the region, the local transmitter and the IESO will make recommendations to address the longer-term needs in the region based on planning criteria and consideration of community input.

For regional planning purposes, the West of Thunder Bay sub-region is defined as the area bordered to the south and west by the United States and Manitoba borders, and extending north to include Kenora, Dryden and Sioux Lookout, and east as far as (but not including) the City of Thunder Bay.

The sub-region includes the City of Kenora, the City of Dryden, the Town of Fort Frances, the Town of Sioux Lookout, the Town of Atikokan and surrounding towns, townships and communities in unorganized districts. A full listing of the municipalities in the regional planning area can be found in the draft terms of reference document.

The IESO engages with local and regional communities to seek input to help inform regional planning activities. An Integrated Regional Resource Plan (IRRP) from the latest West of Thunder Bay planning cycle was finalized in 2016. See engagement materials on the previous planning cycle.