Electricity prices change in response to supply and demand. Here is an overview of pricing in Ontario's electricity market, including access to historical information.

HOEP is only one part of the total commodity cost for electricity. The global adjustment (GA) is the component that covers the cost of building new electricity infrastructure in the province, maintaining existing resources, as well as providing conservation and demand management programs.

This graph represents the total commodity portion of electricity on your electricity bill. There is an inverse effect on the two columns–generally when HOEP is lower, GA is higher and vice versa. 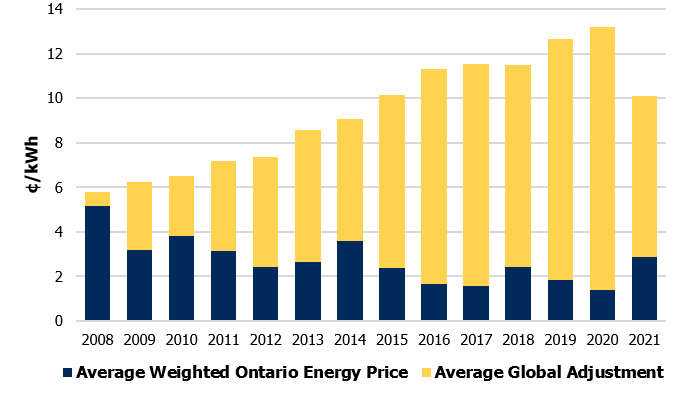 All customers in Ontario pay GA − how they are billed is determined by the type of consumer they are. Consumers that participate in the Industrial Conservation Initiative (ICI), referred to as Class A customers, pay based on an annual determination of their coincident peak demand which in turn specifies their share of GA costs. All other consumers in Ontario pay a share of GA through the Class B GA rate as seen below.

The Bottom Line on Electricity Prices

These Class B customers will see a separate line item on their bill for GA. 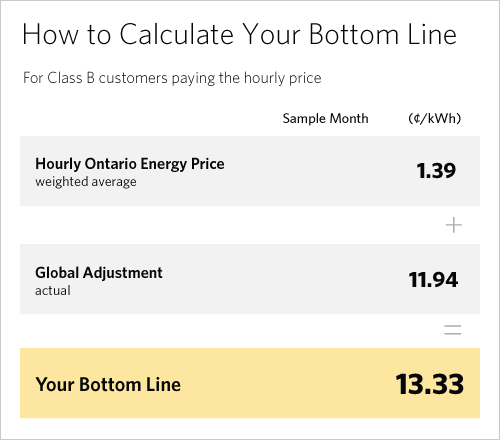 Your LDC will be able to tell which variation of the GA they bill on. If the rate on the IESO website is different than the rate on your bill, your LDC can provide more information (for example, your billing period spans more than one calendar month).

The IESO publishes three variations of the Class B GA rates. The 1st Estimate for GA looks ahead to the following month's Class B rate, based on Ontario demand forecasts, estimated contract and program costs and true-ups from previous months. It is primarily used by local distribution companies for billing purposes−and for many customers it is the value they will see on their bill. While the 1st Estimate is not calculated as a forecast of actual GA costs, it can provide consumers a guide against which they can compare real-time market prices. The monthly actual GA is published after the fact and is calculated using final demand and cost information. The rate used by LDCs to bill their customers does not affect the overall amount paid for GA over time.

Below are the three variations of the Class B rate in kWh for the current and previous year.

The global adjustment (GA) amounts increase or decrease in response to changes in HOEP. When HOEP is lower, the GA is higher to cover the additional payments such as for energy contracts, and regulated generation. GA also changes in response to system conditions, and with the addition of, or changes to generator contracts and programs.

This chart shows the total monthly GA costs broken down by fuel types and programs. 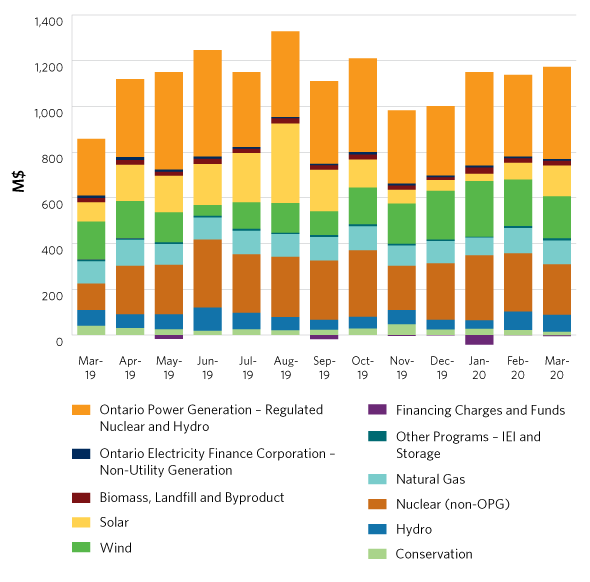 Other Programs - IEI and Storage

On May 9, 2019, legislative amendments to Ontario Rebate for Electricity Consumers Act, 2016 and the Ontario Fair Hydro Plan Act, 2017 (OFHPA) were passed to end Global Adjustment Refinancing and replace it with a new rebate, the Ontario Energy Rebate (OER), effective November 1, 2019. The OER is an expansion of the 8% provincial rebate and replaces the GA Modifier under the OFHPA that reduced the GA payable by eligible customers on electricity consumed.

On May 9, 2019, legislative amendments to ORECA and the Ontario Fair Hydro Plan Act, 2017 (OFHPA) were passed to end Global Adjustment Refinancing and replace it with a new rebate, the Ontario Energy Rebate (OER), effective November 1, 2019.

The following table presents the historical monthly amounts recorded in the OFHPA variance account, which includes amounts of deferred GA.