An Integrated Regional Resource Plan (IRRP) was released for the Central Toronto sub-region in April 2015.

An addendum to the Central Toronto sub-region was completed in February 2017.

In the long term, or 10 to 20 years from now, Central Toronto's electricity system is expected to reach its capacity to supply growth at the two major autotransformer stations and at key transmission facilities supplying the area in 2026 or later. 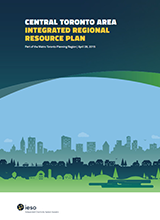 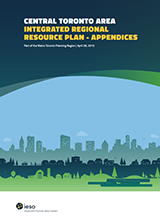 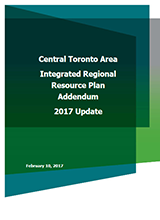 A Working Group consisting of the local distribution companies in the region, the local transmitter and the IESO will make recommendations to address the longer-term needs in the region based on planning criteria and consideration of community input.

The Working Group currently consists of representatives from Toronto Hydro-Electric Systems Ltd. Hydro One Networks and the IESO.

How to get involved

A Local Advisory Committee has been established to give advice on the development of the sub-region's longer-term electricity plan, including how best to engage the community in this discussion. To find out when the committee is meeting and to participate, see the engagement page. 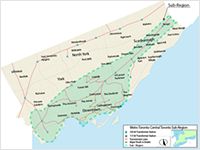 Central Toronto is one of the largest electricity consuming areas in the province. With over one million residents, electricity demand in this region peaks at about 2,000 MW. Extensive residential and commercial development, increased density and land use in the area have contributed to the steady growth in this region over the past several years. The downtown area has been identified in the City of Toronto Official Plan as an important area for future growth, and the current pace of building development indicates that growth is well underway.

The Central Toronto IRRP includes the area extending northward from Lake Ontario to within 0.5 km of Highway 401, westward to the Humber River and eastward to Victoria Park Avenue. Electricity to this area is primarily supplied by the 115-kilovolt (kV) Hydro One transmission system.

Plans for central Toronto have been developed and revised over many decades – by the former Ontario Hydro and most recently by the former OPA in the 2007 Integrated Power System Plan. Following this 2007 study, investments were made in generation and transmission infrastructure to improve the reliability and security of the electricity supply, increase the local capacity for meeting electricity demand, and connect distributed and renewable energy generation within the city.