A clean and diverse resource mix continued to provide reliable power in Ontario while energy efficiency programs, embedded generation and demand response participation helped ensure the electricity needs of Ontarians were met in 2018. Ontario’s demand for electricity over the course of the year returned to the flat trend observed over the last 10 years, after a deviation in 2017, caused by mild and wet weather resulting in lower demand.

Looking ahead, the electricity system has sufficient resources to maintain reliability in Ontario through 2019, but there is a potential need for new electricity supply in the coming years. A new, long-term forecast released by the IESO at the Technical Planning Conference in fall 2018 showed that Ontario is emerging from a capacity surplus and there is a potential need for additional supply as early as 2023. Recognizing our changing needs, fundamental changes to the electricity market are underway through the Market Renewal Program. This program will improve and strengthen the structure of the existing market, and move Ontario toward a more innovative and competitive auction to acquire the electricity needs of tomorrow at the lowest cost to consumers. This project is expected to deliver $3.4 billion in savings over a 10-year period. Learn how the IESO is designing the electricity market of tomorrow and join the conversations that are shaping it.

Total energy demand in 2018 was 137.4 terawatt-hours (TWh), a 5.3 TWh or four percent increase from demand levels in 2017, but in line with demand levels observed in 2016 and 2015 and back to the flat trend observed since the 2008 recession. The demand peak of the year was 23,240 megawatts (MW), reached on September 5 during a prolonged period of unseasonably high temperatures. This peak was reduced by embedded solar generation and large industrial consumers reducing their consumption, through the Industrial Conservation Initiative (ICI). This was the third consecutive year the annual demand peak occurred in the month of September. This trend is attributed to warm weather lingering into the early fall months, at the same time that embedded solar output is decreasing due to shorter and less intense daylight hours.

On a daily basis, the IESO continues to see flattened demand peaks, resulting from the combined impact of consumer response to price incentives, such as the ICI, and generation from embedded resources – especially solar – that offsets demand on the transmission grid. The rapid growth of these embedded generation resources over the last few years has largely plateaued. At year-end, there were more than 4,100 MW of distributed energy resources (DERs) in the province. This number includes embedded generation that is contracted or under development and aggregated demand response (DR) procured through the DR auction.

In 2018, more than 93 percent of electricity generated in Ontario came from non-greenhouse gas emitting* resources (nuclear, hydro, wind and solar). Nuclear power continued to be a substantial form of generation for the province; 35 percent of installed capacity on the transmission system, and representing 61 percent of the energy produced in 2018.

Hot summer weather drove up supply from gas generation by about 3.7 TWh. As a resource used to meet peak demands and provide operational flexibility, gas output in July and August grew to help maintain reliability during periods of increased consumer demand for electricity and support long-term nuclear refurbishment.

Changes to Ontario’s installed generation in 2018 included the addition of 273 MW of wind, and the removal of 200 MW of biofuel and 8 MW of hydroelectric capacity from Ontario’s fleet.

Represents IESO-metered generation that may be distribution connected.
Due to rounding, percentages may not add to 100.
*Most solar facilities are connected to distribution systems, not the transmission system.
**2016 values represent solar/other output.

The weighted average wholesale price of electricity – the Hourly Ontario Energy Price (HOEP) – for 2018 was 2.43 cents/kilowatt-hour (kWh). The estimated 2018 Global Adjustment (GA) Class B rate as of January 17, 2019, was 9.07 cents/kWh. The total cost of power for Class B consumers, representing the combined effect of the HOEP and the GA, was 11.50 cents/kWh.

As part of a large, interconnected transmission system, imports and exports continued to support system reliability and economic efficiency; exports help to manage periods of surplus baseload generation and imports supplement local resources to help Ontario meet demand. In 2018, Ontario continued to be a net exporter, importing 8,438 GWh and exporting 18,591 GWh in 2018. This represented a 19 percent decrease in net export volumes over 2017.

Energy efficiency is the most cost-effective resource to help meet the province’s energy needs. At about two cents per kilowatt-hour, energy efficiency leverages investment in existing assets and helps avoid investment in new, more expensive electricity infrastructure. In 2018, the IESO continued to enable energy efficiency through a combination of incentive programs, such as rebates on equipment upgrades, customer engagement, and support for training and education initiatives. This effort resulted in more than 6.2 TWh of net energy savings from programs delivered by local distribution companies and the IESO since 2015 – the equivalent of taking half a million homes off the grid for a year.

In 2018, there was a significant reduction in the nuclear curtailments and shutdowns due to planned nuclear outages, including refurbishments occurring during typical SBG periods, particularly the spring. As a result, there were only 115 nuclear manoeuvres in 2018, down from 511 in 2017, representing a total of 168 GWh or approximately 0.2 percent of total nuclear energy. No nuclear shutdowns were required in 2018.

The IESO’s variable generation (VG) dispatch allows the system operator to harness the flexibility of wind and solar to help balance the electricity system. In mild weather conditions, the VG dispatch also helps avoid nuclear shutdowns during periods of surplus baseload generation (SBG). In 2018, the total amount of wind and solar energy that was dispatched down was 2,122 GWh, representing approximately 19 percent of total variable generation in 2018. This is down from 26 percent in 2017, due to planned nuclear outages that took place during typical periods of SBG. 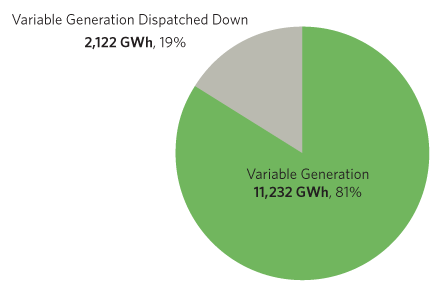