Ontario is in a stable electricity supply situation after years of investment in new generation, with enough existing and available resources to meet the province’s needs for the next decade. Here’s a recap of how Ontario’s electricity system performed in 2019.

During the first months of the year, Ontario experienced blustery, cold weather and freezing rain. Cold temperatures can pose operating challenges on the power grid due to higher demands, potential ice build up, frozen equipment, and gas supply limitations.

The IESO issued an Extreme Conditions Alert for seven days in January, allowing us to take additional actions outside of the market for reliability, such as bringing additional generation online for flexibility. On January 21, approximately 2,100 MW of generator capacity was lost in the span of two hours due to cold weather-related issues. IESO control room operators maintained reliability by committing additional generation in advance and deferring or recalling transmission outages.

Due to the increasing frequency of severe weather events, the IESO started to use extreme weather scenarios rather than normal weather scenarios when assessing generator outage requests. This change increases the resiliency of the Ontario power system and supports reliability during planned and unplanned outages.

Then, it felt like summer wouldn’t arrive. Ontario experienced one of the coldest months of May in the past 50 years. When summer did land, it brought volatile weather including warm spells and storm conditions. On a sunny July 19 afternoon, we saw ~1,300 MW or 5% demand dip due to a storm moving in, reducing air conditioning needs. Concurrent with the storm front, solar output also dropped due to increasing cloud cover. One of the ways in which control room operators manage these real-time challenges is to dispatch generators, such as gas, hydro and wind, to quickly reduce their output. Demand increased later in the afternoon after the storm passed and temperatures rose again.

On the next day, IESO control room operators managed a substantial 1,050 MW ramp up of wind generation due to another storm (Figure 1). For both weather events, the IESO had the tools, training and processes on hand to manage these challenges. 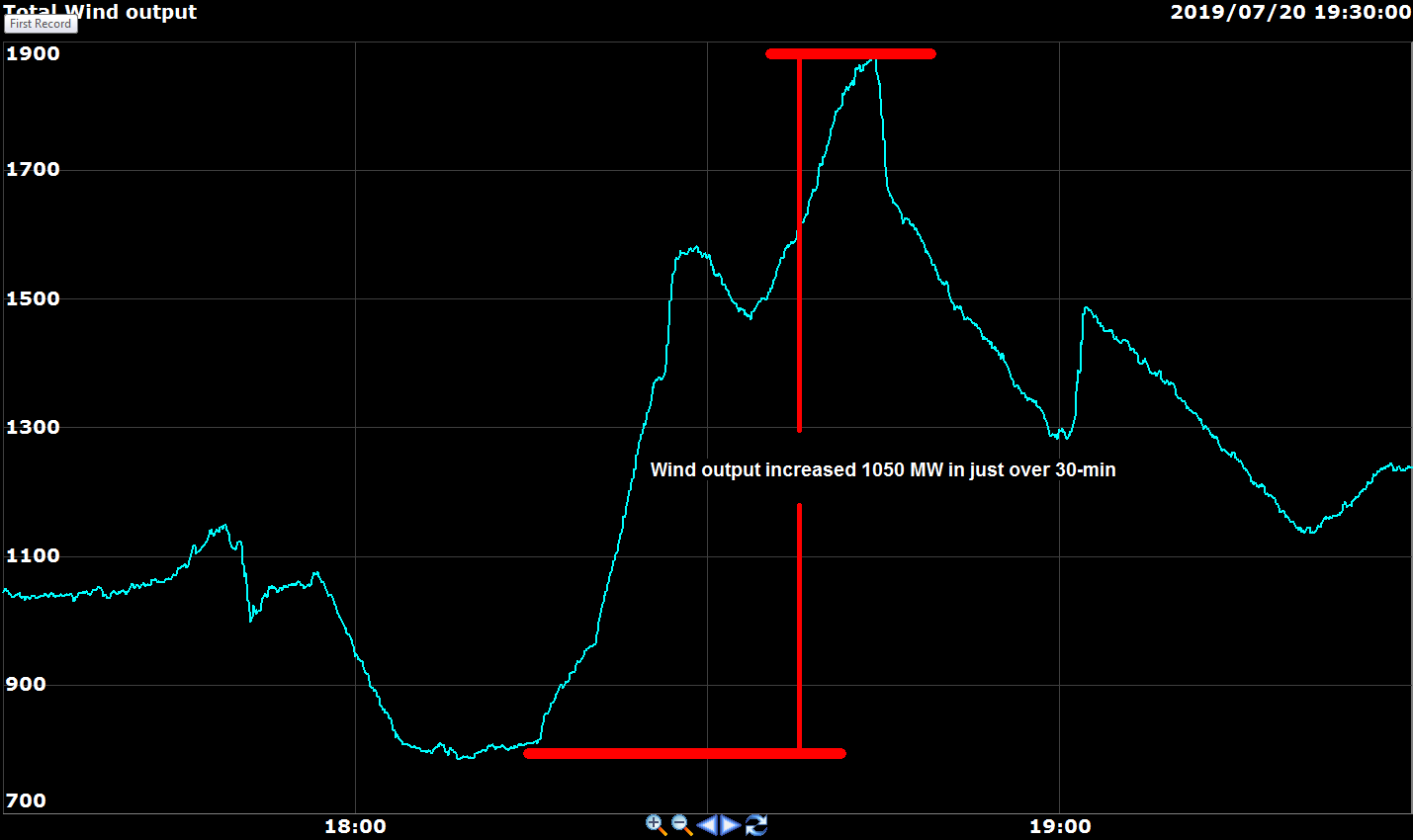 For three of the past four years, we have seen the annual system peak pushed into September due to unusually hot weather. In 2019, however, several days of high temperatures resulted in the system peak being set on July 29. Warm temperatures for the rest of the summer led to higher demand, which resulted in gas resources meeting the peak more than 50% of the time.

Come fall and the beginning of winter, Ontario experienced the third coldest November of the past 50 years, coinciding with early snow. With the required preparations made, Ontario’s electricity system was ready for winter.

Ontario’s energy demand in 2019 was 135.1 TWh, the second lowest total demand over the past 25 years. Demand has been trending lower over this period due to economic restructuring, energy efficiency and increased output from distributed energy resources (Figure 2).

However, there are certain regions in the province that are seeing demand increase, such as in the Windsor-Essex region where the greenhouse agriculture sector is flourishing.

The highest peak demand for the year was 21,791 MW, on July 29, 5 p.m. EST, a relatively low summer peak. Large consumers (Class A) helped to lower the peak by reducing approximately 1,550 MW of their electricity use. Figure 3 below illustrates the impact of demand response on July 29. 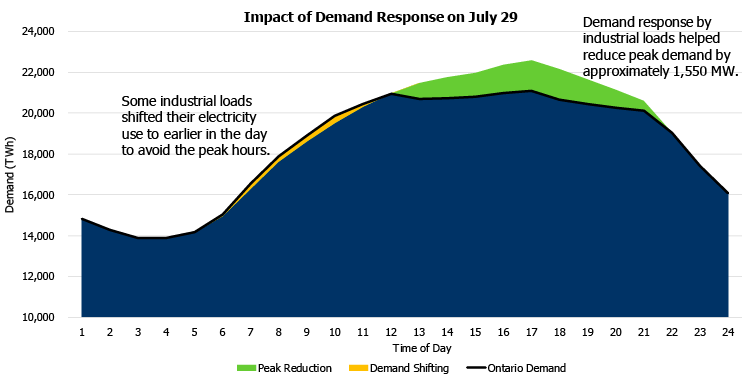 Nuclear and hydro continue to provide the majority of power, while wind and solar make up a small but increasing contribution to output (Figure 5). 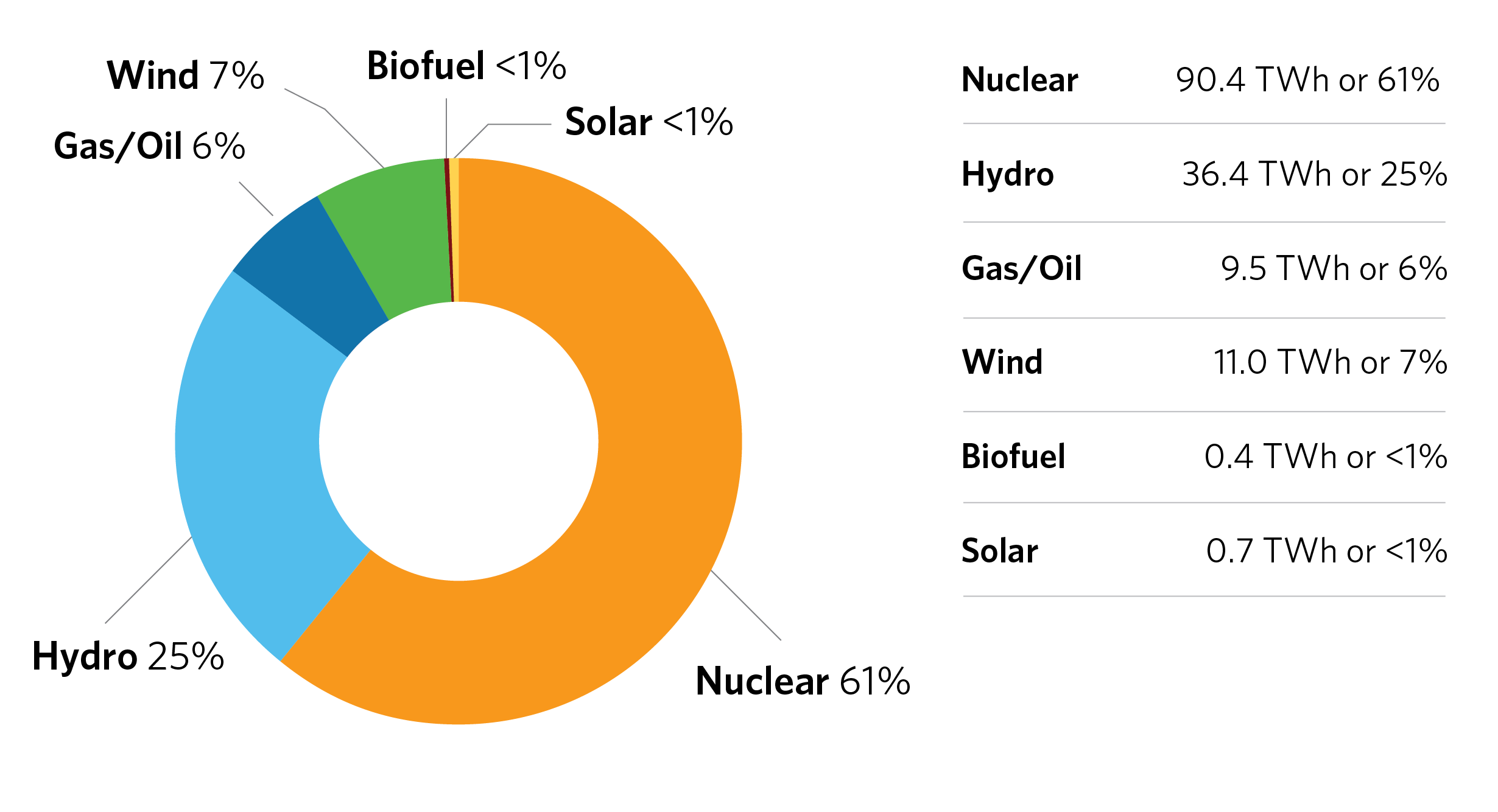 Notes:
- Represents IESO-metered generation that may be distribution connected.
- Due to rounding, percentages may not add to 100.

Changes to transmission-connected capacity include an additional 44 MW of solar, and 16 MW of hydro in 2019. After years of investment in new generation, Ontario is in a stable supply situation (Figure 6).

Figure 6: After recent years of capacity additions Ontario is in a stable supply situation. 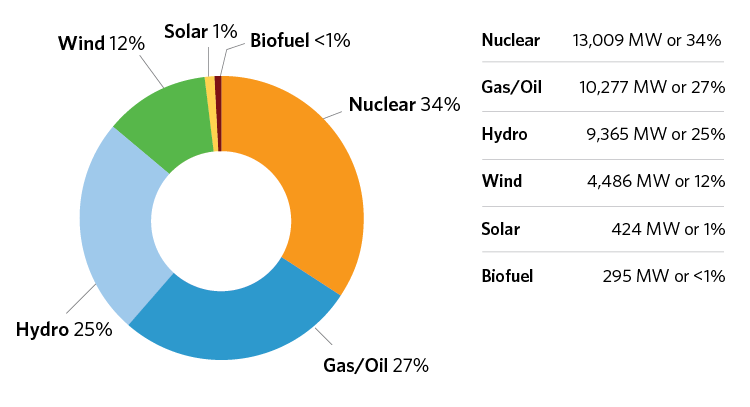 Successful participants in the Demand Response (DR) Auction are engaged electricity businesses and consumers, committed to reducing their electricity use to help manage reliability when called upon by the IESO. The fourth DR auction in December 2018 secured 818 MW of capacity for summer 2019 and 854 MW for winter 2019/2020.

About 52 MW of storage are participating in IESO-administered markets. Current storage facilities on the grid are providing ancillary services, and contributed roughly 10 GWh to the system in 2019.

Several nuclear units came back online from long-term outage in 2019. A low demand spring, particularly in June, resulted in the need to manage surplus baseload generation (SBG). The majority of nuclear manoeuvres and shutdowns occurred during this time. In all, there were 292 nuclear manoeuvres, representing a total of 604 GWh or approximately 0.7% of total nuclear output, and two nuclear shutdowns.

The IESO oversaw and reconciled more than $18 billion in financial transactions in 2019 from IESO-administered markets, related services, programs and electricity charges.

Imports help to meet Ontario demand while exports provide additional revenue that reduces costs that otherwise would have had to be paid for by Ontario consumers. In 2019, exports contributed over $360 million towards meeting Ontario’s electricity system costs.

Energy-Efficiency Savings from Save on Energy Programs

Last year, Ontarians achieved 0.93 TWh in energy savings through Save on Energy programs, contributing to overall savings of 7.4 TWh since 2015. With the adoption of a new centralized model for program delivery earlier last year, Save on Energy programs are focused primarily on supporting Ontario’s businesses, with a renewed support for income-eligible customers and Indigenous communities. Customer interest in available energy-efficiency programs remains high with the IESO forecasting to meet energy and demand savings targets -  as well as address future capacity needs – at less than 3 cents/kWh.