A mild and wet summer led to lower peak days and reduced total demand for electricity in Ontario last year. The Independent Electricity System Operator’s 2017 electricity data shows that Ontario’s clean and diverse power supply continued to reliably meet the province’s energy needs, while increased participation in conservation programs, growth of demand response and added generation in distribution networks, changing the shape of demand patterns and evolved Ontario’s electricity landscape. Looking ahead, Ontario’s power system is well-positioned to maintain reliability in 2018 and into the future putting the IESO in a good position to continue to pursue enhancements to Ontario’s electricity market through the Market Renewal project.

Ontario’s total energy demand in 2017 was 132.1 terawatt-hours, a 4.9 TWh or 3.6 percent reduction from demand levels in 2016. The highest demand peak of the year was recorded at 21,786 megawatts (MW) on September 25 during a prolonged period of unseasonably high temperatures. The peak was low by historical standards and unusual in that it occurred in the fall. Estimates suggest that approximately 1,700 MW of demand response was observed that day, which represented the combined results from the Industrial Conservation Initiative, capacity-based demand response and the activation of the peaksaver PLUS residential demand response program.

The mild and soggy weather also led to some unusual demand patterns. Generally, peaks were lower and demand patterns flatter than in the past, resulting in some occurrences of weekend peaks. The growing impact of distribution-connected generation is also changing the shape of Ontario’s demand, in some instances leading to midday demand that is lower than overnight demand.

Ontario’s electricity supply was clean and diverse in 2017. Preliminary generation data showed over 95 percent of electricity generated in Ontario came from non-greenhouse gas emitting* resources (nuclear, hydro, wind and solar). Nuclear power continued to be a significant form of generation for the province, making up 35 percent of installed capacity on the transmission system and representing 63 percent of the energy produced in 2017. Corresponding to lower overall and peak demand, gas generation use went down in 2017 to four percent. Even though its use was down overall, gas continued to provide important operating flexibility to the system.

**2015 and 2016 values represent Solar/Other output.
*Most solar facilities are connected to distribution systems, not the transmission system.
Due to rounding, percentages may not add to 100.
TWh = terawatt-hours

The IESO’s variable generation (VG) dispatch allows the system operator to harness the flexibility of wind and solar to help balance the system in a changing environment. In mild weather conditions, the VG dispatch also helps avoid nuclear shutdowns during periods of surplus baseload generation (SBG). In 2017, the total amount of wind and solar energy that was dispatched down was 3,329.5 GWh. 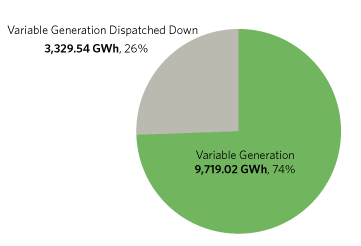 The weighted average wholesale price of electricity – the Hourly Ontario Energy Price (HOEP) – for 2017 was 1.58 cents/kilowatt-hour (kWh). The estimated 2017 Global Adjustment (GA) Class B rate as of January 15, 2018, was 9.97 cents/kWh. The total cost of power for Class B consumers, representing the combined effect of the HOEP and the GA, was 11.55 cents/kWh.

As part of a large, interconnected transmission system, imports and exports continued to support system reliability and economic efficiency in 2017. Ontario continued to be a net exporter, importing 6,627 GWh and exporting 19,098 GWh in 2017. This represented an 11 percent decrease in net export volumes over 2016.

At the halfway mark for the Conservation First Framework, the province is on track to meet its targeted energy savings of 7 TWh target for the CFF and 1.7 TWh for the Industrial Accelerator Program by 2020. Preliminary results for 2017 indicate nearly four terawatt-hours (TWh) of net energy was saved, attributable to programs delivered by local distribution companies and the IESO since 2015.

Nuclear manoeuvring capability offered by Bruce Power supports system reliability by reducing the output of nuclear units by approximately 300 MW each. This capability provides valuable flexibility to the system during period of low demand where surplus baseload generation (SBG) exists, they also help the IESO prevent nuclear shutdowns. According to preliminary data, there were 511 nuclear manoeuvres in 2017, representing a total of 959.2 GWh and three nuclear shutdowns to help manage SBG. 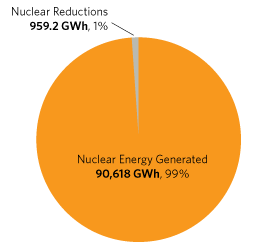 *Note that these values include all nuclear reductions for SBG, not reductions made for other reasons (such as planned or forced outages).