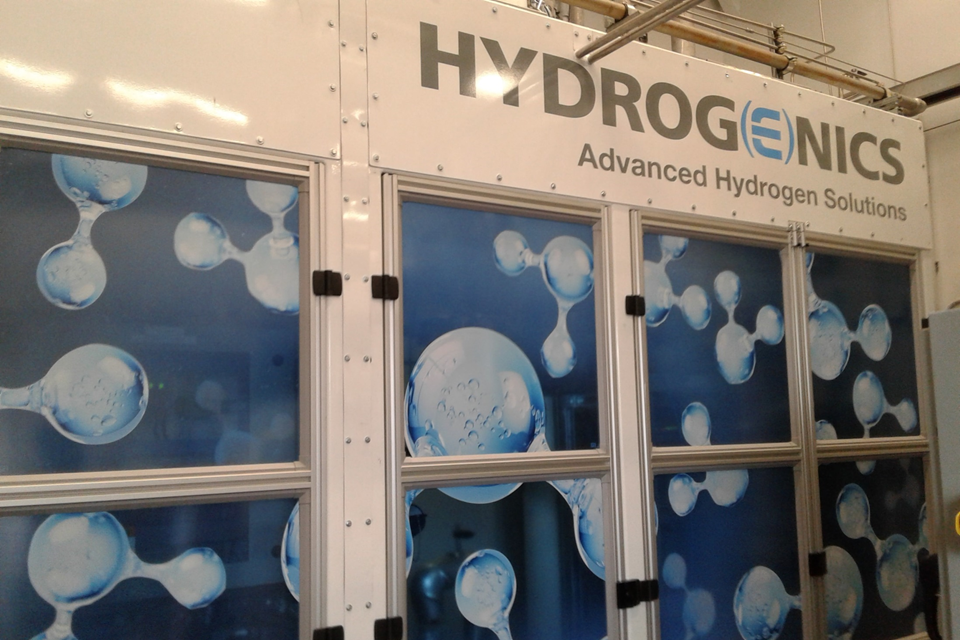 Ask system operators almost anywhere in the world, and they’ll tell you that their top priority is to balance electricity supply with customer demand on a minute-by-minute basis, while at the same time ensure that those electricity flows are within the capability of the system to carry it. That hasn’t changed. Increasingly, however, system operators are experimenting with energy storage to test its potential for grid balancing and to help drive down the system’s operational costs.

Currently, the IESO has over 20 energy storage facilities under contract. In wholesale markets across the United States, cumulative installed capacity is now approaching 750 megawatts. 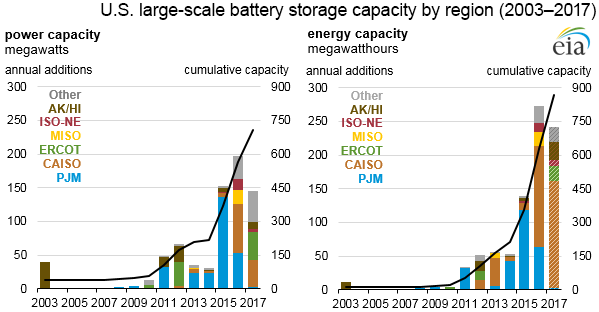 The left chart shows the annual increase in installed power capacity in MW of energy storage facilities in the U.S. system operator territories. The right chart depicts the total amount of energy (MWh) those facilities are capable of storing. The black line on the left shows that cumulative power capacity has increased by over 700 per cent during the past 14 years.(Image source: United States Energy Information Administration)

To understand how energy storage has gone from being a technological outlier to being an industry insider in such a short amount of time, consider the circumstances at play. The electricity system has historically operated on a “just-in-time” basis, with decisions about electricity production based on real-time demand and the availability of transmission to deliver it. Now, with energy storage becoming more widespread, greater amounts of electricity can be captured and dispatched to the grid whenever they are needed.

The IESO is interested in energy storage because of the following benefits for the electricity system:

“Energy storage is an innovative way for us to address the challenges that are a direct result of more variability and uncertainty, in both supply and demand, at all levels of the electricity system,” says Leonard Kula, the IESO’s Vice President, Planning, Acquisition and Operations, and Chief Operating Officer.

There are also economic benefits, including the fact that services like congestion relief, grid balancing, and demand reduction have an economic value that will increase or decrease with demand, and as more market competition from different sources comes into play. In the new energy marketplace, Kula says system operators are paying attention to the ability of these different sources to deliver the reliability services needed, and their costs, as they look for ways to ensure the grids they oversee are managed cost-effectively.

How does energy storage work?

Electricity is generated in different ways, including water, wind, solar, nuclear, natural gas and biomass. It can only be stored if it is converted into another form of energy such as chemical, thermal or kinetic energy.

Thermal energy storage technology reserves energy in the form of heat or cold. It can take excess generation off the grid and use it immediately.

Hydrogen energy storage converts electricity to hydrogen and injects it into a storage tank or the natural gas system. In some arrangements, such as with the Phase 1 energy storage program, a hydrogen fuel cell is then used to convert the hydrogen back into electricity.

Objects in motion contain kinetic energy (the energy generated by movement). Typically, it is stored in flywheels that use a rotor placed within a vacuum to discharge energy. Kinetic energy can be stored and released quickly as needed. There are currently two flywheel facilities providing regulation service in Ontario.

Some types of energy storage use batteries to store the energy until it is needed. There are many different types of batteries. Flow batteries and solid-state batteries are two common varieties.

Flow batteries store energy in chemically reactive liquids that are held in two tanks, separate from the battery cell. The liquids are pumped through the cell, causing a chemical reaction that releases electrons that, in turn, supply power for the grid. The battery is recharged by reversing the flow of the chemicals and pumping the electrons back into the battery. Solid-state batteries, consisting of a positive and negative side, with an electron-producing layer in between, are also used for energy storage.

According to the European Union, the cost of batteries used for energy storage is expected to decrease significantly towards 2030. Between 2007 and 2014, costs dropped by 70 per cent. A further 70 per cent reduction is forecasted towards 2030, due to innovation and economies of scale. Global management consulting firm, McKinsey, estimates that battery costs could be $200 per kilowatt-hour in 2020, half of today’s price, and $160 per kilowatt-hour or less in 2025.

Featured is Ontario’s first power-to-gas energy storage facility at Enbridge’s Technology and Operations Centre in Markham. The site is owned and managed as a joint venture between Enbridge and Hydrogenics.