Electricity use in Ontario is showing signs of recovery from the effects of the pandemic, as total electricity use increased by 1.2 per cent to 133.8 TWh, compared to 2020.

Residential air conditioning load increased as more people worked from home, contributing to a 2021 hourly demand peak of 22,986 MW on August 24. The reinstated Industrial Conservation Initiative (ICI) played an important role in helping to reduce demand by roughly 1,200 MW, as well as lower energy use in the commercial sector due to lower office occupancy. For comparison, without the ICI in 2020, the peak reached 24,446 MW.

In terms of electricity output compared to the previous year, nuclear refurbishment outages and drought conditions in the Northwest decreased nuclear and hydro output. Note that output data reflects production from generators supplying energy through the province’s transmission system but also includes a very small number of distribution-connected resources that participate in the IESO market.

This resulted in more imports from Quebec and natural gas generation to meet Ontario demand. These operating conditions also led to fewer nuclear and variable generation curtailments. Ontario continues to be a net exporter, however, supplying neighbouring jurisdictions including Minnesota, Michigan, New York, Manitoba, and Quebec.

The wholesale hourly price doubled this year given the increased demand. However, the all-in commodity cost of electricity was 23 per cent lower this year given changes to the Global Adjustment as the majority of non-hydro renewable energy contract costs were shifted from the rate base to the tax base.*

*As of January 1, 2021, Global Adjustment costs for all electricity consumers are being reduced because approximately 85 per cent of non-hydro renewable energy contract costs are being shifted from the rate base to the tax base. Savings will vary, depending on consumers’ electricity consumption, ICI participation, and location.

Here is a recap of how Ontario’s electricity system performed in 2021. Electricity output figures do not include IESO-contracted resources that are settled outside of the market or are behind-the-meter.

Notes: Due to rounding, percentages may not add to 100.

Grid-connected capacity in 2021 totalled 38,079 MW*. This includes the addition of 300 MW of wind generation that reached commercial operation in 2021. 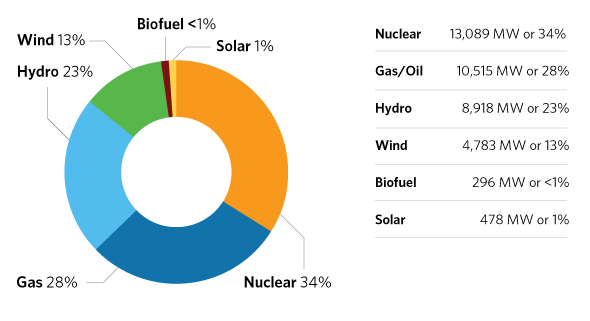 *As of December 20, 2021. The IESO has made changes in 2021 to better align the Reliability Outlook methodology with the Annual Planning Outlook, and to more accurately account for the current installed capacity of resources across Ontario. This resulted in changes to the reported capacity of nuclear, hydro, gas/oil, wind, and biofuel.

The list of successful participants can be found in the news item.

This pilot project marked the first time in Canada DERs secured through a local capacity auction were used to help reduce local peak demand. Successful DER participants from the 2020 auction were activated during a heatwave last summer to help reduce local demand by 4.6 MW on June 7, 2021 and 3.6 MW on June 28, 2021. There were a total of nine activations in the summer of 2021.

A new round of DERs participated in year two of the local capacity auction, expanded to allow participants to provide local reserve service. A total of 15 MW of capacity was procured through the auction with a clearing price of $0.40/kW-day, lower than last year ($0.64/kW-day).

About 54 MW of storage capacity participates in the IESO-administered markets mostly by providing ancillary services – but also through the capacity auction. They contributed roughly 10.9 GWh to the system in 2021 providing system balancing and frequency regulation.

Energy Efficiency Savings from Save on Energy Programs

Even as the impacts of the pandemic continued to be felt by residents and businesses across the province, Ontarians continued to reduce their energy use in 2021 by almost a terawatt hour* by implementing energy-efficient improvements through Save on Energy programs such as the Retrofit program, Small Business Lighting program, and the Energy Affordability program. The electricity saved is equivalent to powering a city the size of Oshawa for one year.

Since Save on Energy energy-efficiency programs were first launched more than a decade ago, Ontario has achieved 17 TWh of energy savings, enough to power over two million homes for a year. More than 270,000 residential electricity consumers and businesses have participated in a Save on Energy program. Ontario’s demand for electricity is expected to grow over the next 10 years and energy efficiency will play an important role in cost-effectively meeting system needs, driving cost competitiveness and promoting customer-driven solutions.

* Savings data for 2021 are preliminary and unverified. These data will be updated as the numbers are finalized.