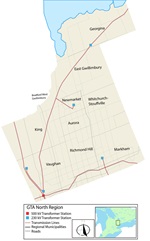 The regional planning cycle was completed for York Region with the release of an Integrated Regional Resource Plan (IRRP) in February 2020 and the supporting Appendices in March 2020. A Regional Infrastructure Plan (RIP) led by Hydro One will be completed by mid-2020. A Scoping Assessment Outcome Report and Terms of Reference for GTA North (York Region) IRRP was finalized and posted in August 2018, following a two-week comment period.

Visit here for more information about the Regional Planning Process. See below for past regional planning activities in this region.

A Technical Working Group will follow the regional planning process to discuss opportunities to identify and meet local electricity needs. For the purposes of this regional planning activity, the Technical Working Group will consist of representatives from the three LDCs in the area - Newmarket-Tay Power, Alectra Utilities, Hydro One Networks Inc. (also Transmitter), and the IESO.

The regional planning cycle begun in 2013 for the York sub-region was completed in April, 2015 and an Integrated Regional Resource Plan (IRRP) was released.

In the near term, three transmission projects are recommended to address capacity and reliability needs; these projects are already under development by Hydro One and Alectra Utilities (formerly PowerStream).

In the medium to long term, York sub-region's electricity system is expected to reach its capacity to supply growth in the early to mid-2020s based on current projections. If the growth materializes, there will be a need for additional new supply in the region. The Working Group will seek community input on possible solutions.

A portion of northwest Vaughan is being studied through a separate initiative. Please visit the Related Studies section of the GTA West regional planning webpage for more information about the Northwest GTA Transmission Corridor Study.